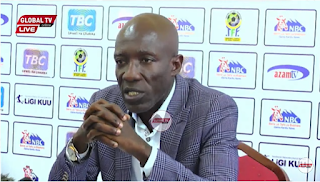 Almasi Kasongo, Director of the League Board

The Chief Executive of the Diamond League Board today August 3, 2022 has officially announced the schedule of the NBC Premier League for the 2022/2023 season where the Yanga Club will open its curtain of the League by being the guest of the Tanzania Police while the Simba Club invites Geita Gold FC at Benjamin Mkapa Stadium in Dar es Salaam.

In addition, Kasongo has said that the traditional hometown game between Yanga and Simba will be played on October 23, 2022 at the Benjamin Mkapa stadium at 11 pm.

Regarding the schedule of the NBC Premier League during the World Cup Finals, Kasongo has said that the League will continue as usual despite the presence of the competition.

Simba will host the game against Geita Gold FC

On the other hand, the Director has noted that TFF continues to communicate with CAF and FIFA on checking the implementation of the process of using VAR in the Premier League competitions of the upcoming 2022/2023 season.