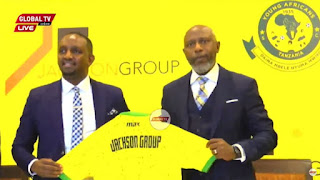 Yanga Set Another Record, Entering Agreements With Big Companies In The Country

The President of Yanga Engineer Hersi Said with the Director of the Jackson Group Company, Kelvin Twisa

Yanga CLUB has made another history today, Friday, August 19, 2022 after entering into an agreement and signing a two-year contract to work with a company specializing in indigenous markets called Jackson Group.

Speaking before signing the contract, the President of the Yanga Club, Engineer Hersi Said, said that after making changes to the Constitution and allowing 51 percent ownership of shares by members and 49 percent by investors, the club has now opened its doors for investors to come and invest and do business and Yanga.

"Before coming to power, one of my agenda and one of the things that I promised during the campaign was to make Yanga commercial so that it can bring in money. Yanga is the oldest club here in Tanzania and it is the club with many titles and many members, but its size and value do not match its development.

"So we have seen that instead of hiring a Marketing Director and paying him money, it is better to find a company that has a lot of experience in marketing matters, so that they can bring us investors and advise us on the best methods for the club to do business and bring in money, the club will bring in money and it will be easy to even build a stadium like as I promised.

"We will not be able to build a stadium or achieve great development as a club, we do not have sustainable economic and productive plans. So we welcome investors and businessmen to come and invest in Yanga," said Hersi.

On his part, the Director of the Jackson Group Company, Kelvin Twisa has said that they have decided to enter into the agreement with Yanga after seeing that it is the best club in Tanzania and with leadership that understands itself, they will be able to manage the rights of the sponsor well.

"We have a lot of experience in matters of football business, I have managed Vodacom contracts with the League Board while I was at Vodacom, we have done business with Simba, Yanga, Gor Mahia of Kenya and the Kenya Premier League. Also, La Liga and England's Everton, so we know well how the football business is done.

"We are sure that with what we are going to do with Yanga, the club will get its money and value along with investors to grow their business and get what they expect. Yanga is big, it has leaders who are careful and it is reliable, that's why it has been easy for us to work with them, we welcome investors to come and work," said Twisa.