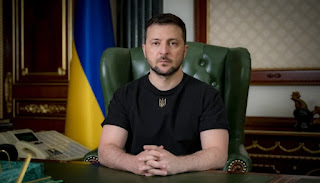 PRESIDENT of Ukraine Volodymyr Zelensky has condemned the attack on a residential area in the country's second largest city, which he described as 'despicable'.

The attack has left a disaster by causing the death of 6 people and leaving more than 16 injured in the second largest city of Kharkiv.

President Volodymyr Zelenskyy said the apartment building was "totally destroyed" in Wednesday night's attack, which he said "the attack had no reason and shows the impotence of the aggressor (Russia)".

He said that they will not forgive the attack and they are planning to take revenge on Russia.

A voice in the video described the incident and said many people were missing.

"Unfortunately, the number of dead and injured in the shelling attack in Saltivka district has increased to six dead and 16 injured," regional governor Oleg Synehubov said on Telegram.

Kharkiv was a Russian target in the early days of the war, but its troops were unable to capture the city.

While Moscow has now shifted its military focus to eastern and southern Ukraine, Kharkiv continues to be hit by aerial attacks.