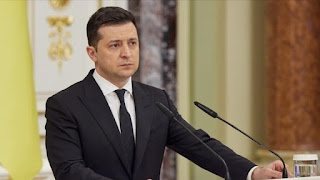 PRESIDENT Volodymyr Zelensky of Ukraine fears that Russia may carry out major attacks as his country looks forward to celebrating 31 years of independence next week.

Authorities in the capital, Kyiv, have announced a ban on public gatherings, and in the city of Kharkiv they have imposed a curfew on Independence Day itself.

Ukraine expects to celebrate its independence day on August 24, a day that will also be the anniversary of six months since Russia invaded the country.

The adviser to the president, Mykhaylo Podolyak, said that Russia could increase its military attacks that day.

"Russia is an ancient state that ties its actions to specific dates, it's a kind of internal belief," the Interfax-Ukraine news agency quoted him as saying.

"They hate us and will try to increase the number of bomb attacks on our cities, including Kyiv, using missiles from the sea," said Podolyak.