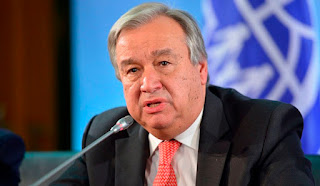 Secretary General of the United Nations

The Secretary General of the United Nations, Antonio Guterres, together with the presidents of Turkey and Ukraine, have discussed ways to end the war started by Russia in Ukraine to protect the largest nuclear power plant in Europe.

Guterres has told reporters after talks in Lviv that he is very concerned about what is going on at the Zaporizhzhia nuclear power plant. Guterres has called for the removal of soldiers and weapons from the country.

"Intelligence must be used so that there are no actions that will endanger the safety of the nuclear plant. The mill should not be used as part of any military operation instead, an emergency agreement is needed to ensure that Zaporizhzhia is a civilian infrastructure and ensure its security." Guterres said while talking to journalists.

They want to end the war against Russia

Turkish President Recep Tayyip Erdogan, Guterres and Ukrainian President Volodmyr Zelensky are looking at a good way of peace that will end this war and leave most of Europe at peace.