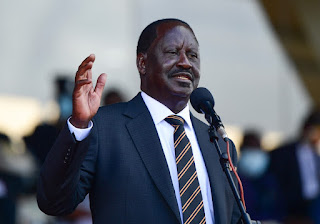 RAILA Odinga, the United Declaration presidential candidate, has lost again for the fifth time against his opponent William Ruto who was declared the winner by 50.49% while Raila won 48.85%.

In 1997, through his National Democratic Party, which he created after withdrawing from FORD-K, Raila Odinga ran for the presidency and failed.

In 2002 through the LDP they joined with NAK and formed NARC which defeated Uhuru Kenyatta but this year Raila Odinga did not run for the Presidency.

When another election year came in 2007, Raila Odinga entered the race for the presidency for the second time against Mwai Kibaki and failed.

In 2008, he was appointed Prime Minister of Kenya and this came after the chaos caused by Raila Odinga's supporters protesting the results of the election which resulted in the deaths of more than two thousand Kenyans.

In 2013, he re-entered the race for the presidency for the third time through the CORD party against his opponent Uhuru Kenyatta and lost.

Another year of the general election in Kenya 2017, Raila Odinga ran again for the presidency for the fourth time through the NASA party against his opponent Uhuru Kenyatta and he lost.

Odinga challenged the results of the election in court as invalid and wanted the election to be repeated, and later announced his official withdrawal from the election.

This year, 2022, he ran for the presidency for the fifth time through the United Declaration coalition against his opponent William Ruto and Kukunduha.

William Ruto through the UDA party ticket has emerged as the President-elect after the results were announced, however Odinga came out publicly to oppose the results calling them invalid and he is not ready to accept them.

Written by: Simon J. Molanga with the help of networks.