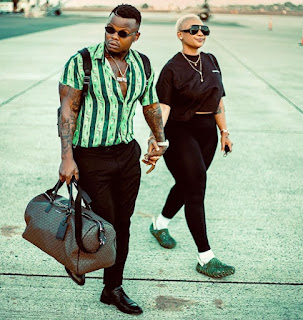 Maybe you can wonder why the artist Harmonize or Konde Boy Mjeshi didn't attend the big event that brought together senior government officials, celebrities and people from inside and outside of Tanzania for the launch of the Barnaba Boy Classic album titled Love Sounds Different.

In the event that took place at the Mlimani City Hall in Dar, earlier this week, fans were very eager to see Harmonize and her fiancee, Kajala Masanja like other Bongo stars.

IJUMAA's investigation revealed that it was not Barnaba's will not to invite Harmonize and Kajala, but the will of the organizers of the event, which is the Wasafi Classic Baby (WCB) label under Diamond Platnumz.

However, analysts say that, the organizers knew that, if Harmonize and Kajala or in short Harmojala had attended, then they would have hijacked the event and neither Diamond nor Zuchu would have been heard as it happened.

"Believe me, if Harmonize and Kajala had come to this event it would have been a disaster, the big kick would have been for them and not Diamond and Zuchu as happened," says Innocent Mawaya; presenter of celebrity programs on Online TV and add;

"And if that happened, then people would believe that Harmonize has grown bigger than Diamond."