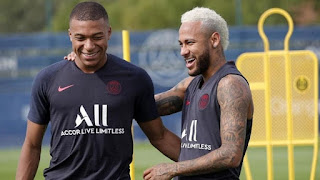 AUGUST 4, 2017 the Paris Saint-Germain (PSG) club in Paris, France announced the official signing of the Brazilian star Neymar Jr. from the Barcelona club, one month later on September 1, 2017 the PSG club announced another recruitment of the youngster 18 Kylian Mbappe from Monaco club.

These two French and Brazilian stars managed to build a good relationship in the field and even in life outside the field.

The relationship between Mbappe and Neymar began to gradually decrease after the transfer of Argentine star and seven-time Ballon d'or award champion Lionel Messi joining from Barcelona at the end of the 2021 season in a large window of employment in Europe where Neymar seemed to be closer to Messi .

Rumors of these two being linked to a lack of understanding flared up more after news sources in France made it clear that Mbappe rejected an offer from the Real Madrid club he felt to join and signed a new contract within PSG that gave him the power to make decisions against his teammates in of the club and at the beginning of this season 2022/2023, Mbappe showed his willingness to ask Neymar to be removed from the club.

The sources went on to say that before signing the new contract, Mbappe was not happy in the club due to having very little influence on the club and his teammates compared to Neymar who seemed to have a lot of influence inside and outside the field, which did not please Mbappe.

However, through his twitter page, Neymar seemed to like the flow of various posts by football stakeholders that explained the weaknesses and shortcomings in the new contract Mbappe signed with PSG, something that raised alarm and convinced fans of the existence of a conflict between them.