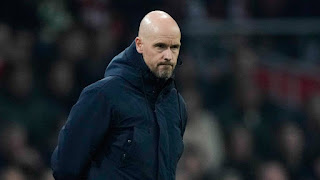 Manchester United coach Erik ten Hag is mulling the idea of ​​leaving captain Harry Maguire ahead of Liverpool on Monday.

Maguire started in both matches in which United lost against Brighton and Brentford and the new central defender Lisandro Martinez was released after the break and was replaced by Raphael Varane as United lost 4 goals to zero.

However, it is said that Ten Hag is considering the possibility of starting Martinez and Raphael Varane who will start for the first time in the United team this season.

Internal news from the Manchester United team says that some United players feel that Ten Hag's methods are not compatible with their style of play and would prefer Ten Hag to change his style of play when they meet Liverpool on Friday.

It is remembered that Liverpool beat United 5-0 at Old Trafford last season and beat them 4-0 at Anfield six months later.

Maguire, 29, was benched by interim manager Ralf Rangnick for United's 3-1 defeat against Arsenal in April, but the England international has continued to captain the team under Ten Hag, despite There is a lot of pressure on Maguire to be stripped of the captaincy.

Written by: Abdallah Kaputi with the help of networks.