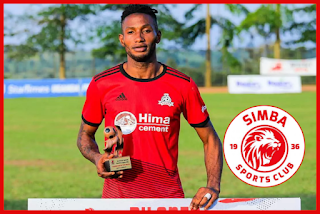 ATTACKER of Vipers FC of Uganda, Cesar Manzoki, any time from now he will be introduced by one of the clubs in China, then after that he will join Simba after three months.

The star was present in plans to sign with Simba this registration period which will close on August 31, this year before Yanga intervened to compete for his signature.

Manzoki himself was ready to join Simba immediately after signing an initial two-year contract against Msimbazi.

One of the bosses of Simba, has told Sporti Xtra that, the striker will join Simba in the registration of the small window coming from China where he is going to play at the moment.

The boss said that the Chinese club, whose name is currently hidden, has agreed to give the registration bet that Vipers wanted to finish the remaining period of his contract with the team, then he will join Simba.

He added that, the striker has agreed to go to China where he will play for three months, after finishing his contract, he will join Simba during the small window during which time he will be stronger in playing, so he will be a help to their team.

"We have seen great difficulties regarding the registration of Manzoki and his Vipers club, where the limit of his contract is confusing us.

"The player himself has made it clear that he has three months left which he will use to play football in China and he will join the Simba camp immediately after the end of his contract.

"So he will officially be present in the team's plans in the small window after finishing with the Chinese club which itself has agreed to give the bet that Vipers want," said the boss.

When contacted, Simba's Information and Communications Manager, Ahmed Ally, said: "Manzoki's registration has not yet been completed due to his Vipers club making it difficult."