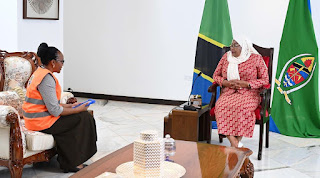 The President of the United Republic of Tanzania, Samia Suluhu Hassan talking to the Census Clerk Phausta Ntigiti when he was being counted at his Residence Chamwino Ikulu in Dodoma Region on August 23, 2022 during the Population and Housing Census.

PRESIDENT Samia today Tuesday, August 23, 2022 was among the Tanzanians counted in the Population and Housing Census that started at 6:01 pm.

The Director General of the Tanzania Statistics Office (NBS), Albina Chuwa and the Commissioner of Population and Housing Census in 2022, Anne Makinda have led a team to Chamwino Palace, Dodoma Region to count President Samia.

Once he finished counting, a task that lasted no more than half an hour, President Samia spoke to journalists saying, "I have finished counting, it is true that there are a few questions but they are answered, my request to the people is to put our information in advance."

President Samia has finished speaking by saying, "I wish our country a good census, that our clerks work efficiently and that the citizens come forward to give the required answers."

The President of the United Republic of Tanzania, Samia Suluhu Hassan speaking to Journalists immediately after being counted at his Residence Chamwino Ikulu in Dodoma Region on August 23, 2022 in the Population and Housing Census.