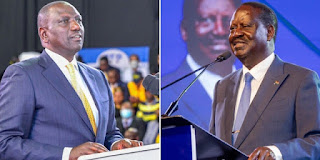 AFTER the results of the Kenyan General Election, President-elect William Ruto has spoken to journalists and said they will participate in any summons issued by the Court on the election results.

The opponent of the President-elect, who is also a veteran Kenyan politician, Raila Odinga, opposed the results announced by the country's Electoral Commission.

In pursuit of democracy, Odinga said he will open a case against the results of the general election held on August 9.

Ruto has spoken to journalists after meeting elected leaders from his political alliance. Ruto has said that the expectations of Kenyans are high and he is continuing his efforts to form his government, which will not exclude anyone on the basis of party or tribe.