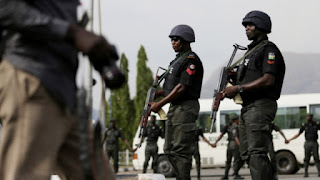 POLICE in Benin city in Edo State in southern Nigeria are holding three people due to the discovery of twenty (20) bodies in a supposedly sacred area.

Police spokesperson, Chidi Nwabuzor, explained this while being interviewed by the BBC that 15 dead bodies of men, three women and two children have been found. Although it is not yet known how long these trees have been growing in that area.

The scene is temporarily closed

The Police spokesman added that armed Police officers and local security guards stormed the building located just outside the city following information given to them secretly.

The discovery of the bodies has shocked and scared people in Nigeria and the residents of the area say they are very scared by the incident.

The police are investigating the scene

Many of them are asking how the bodies could be hidden there without the neighbors and people around the area being unaware of the incident.