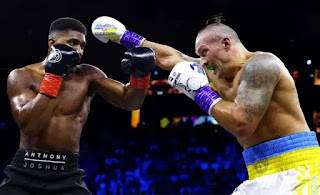 Englishman Anthony Joshua's bid to regain the unified heavyweight titles of the world ended in frustration as Oleksandr Usyk produced a good result and won by a split decision in Jeddah, Saudi Arabia.

In a fight called 'Rage on the Red Sea', the tough Joshua, 32, showed his desire to take the title - and looked to have improved from their first fight - but could not match the skill of the Ukrainian .

Two judges decided the fight by 115-113 and 116-112 giving victory to Usyk, while the third judge gave the opponent 115-113. Although there were competitive rounds, Usyk deserved the win.