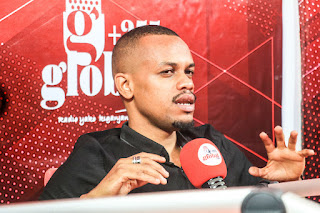 RELATIONSHIP ADVISOR Sheikh Abdulrazack has revealed a secret that was not known among many music fans in the country about how the two artistes Billnass and Nandy started their relationship journey until it ended.

Sheikh Abdulrazack has said that when Nandy was with Billnass, he felt that many people were disrespecting his current husband, who was his lover at the time, so he vowed to find money in any way he could so that he could ensure that he helps Billnass grow his personal economy so that he would be respected.

Sheikh Abdulrazack inside the Global TV and Global Radio Studios

"There is a statement he once said that people despise Billnass but I will find money because of him and this is the one who will marry me, so he did everything in his life to ensure that Billnass also rises with him." said Sheikh Abdulrazack.

Billnass and Nandy are now husband and wife

This expert has continued by insisting that due to the honor he had, Nandy has worked hard to ensure that he fulfills his dreams of keeping Billnass where he is as well as fulfilling his dream of being Billnass's wife.