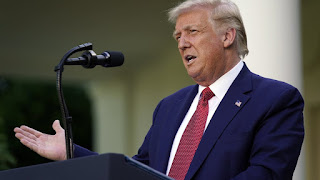 The US government has found more than 300 documents marked as top secrets of the country's government, located at the residence of the former President, Donald Trump in Florida.

Among the documents found are documents from the Central Intelligence Agency (CIA), the National Security Agency (NSA) and the Federal Bureau of Investigation (FBI).

This information was released on August 22, 2022 in the newspaper

300 classified documents have been found in Donald Trump's residence

The newspaper has said that the National Institute for the maintenance of documents in January this year, discovered the first set that contained more than 150 highly confidential documents.

In June of this year, Trump's aides provided the Department of Justice with a second set while the third set was discovered by the FBI when they raided Trump's residence earlier this month.

Earlier yesterday, Trump asked a federal court to temporarily stop the FBI from reviewing the documents it seized on August 8, 2022, at his Mar-a-Lago residence until a special administrator is appointed to oversee the exercise.