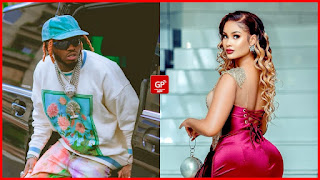 Hamisa Hassan Mobeto; is a famous woman in Tanzania who is alleged to have beaten all the beauties in the city who is now upset by showing the wound of her fellow parent who is a big music star, Nasibu Abdul aka Diamond Platnumz, IJUMAA has a full tape.

People close to Mobeto claim that, the beauty has declared a new war with her ex while clearly explaining the intention to drag her to court once again.

In February, 2018, Mobeto dragged Diamond or Mondi to court demanding custody of their son named Dyllan.

In the case opened at the Kisutu Resident Magistrate's Court in Dar, the two settled and agreed on the care of their child.

For his part, Diamond said; "We will look at how to take care of our child, we hope that he can be a leader in some way, I advise male and female parents to keep their pride aside because at the end of the day it is the child that is affected."

With the agreement where Diamond agreed to take care of their child, but Mobeto's side has started a new war while making serious allegations that the relative does not provide child care.

Speaking about the allegations, Mobeto has opened up seriously, seeming to have something serious in his heart, saying; "I don't have time to pamper the father of my child (Diamond), he is an adult and he knows if it is his child, I don't understand why he discriminates against him."

However, on the saga of Mobeto and Diamond's child, there have been claims for a long time that the relative's family may not believe that the child is their blood.

But in the answers Mobeto gave in October, 2020, it is true that he and Diamond did DNA tests to assure themselves and the answers came out 100% that the child is Diamond's.

Mobeto said; "We went to the hospital and four tests were taken, they told us to wait two or three weeks and the results from the child were 100% Diamond's."

DANGOTE'S MOTHER WILL BE MENTIONED

However, over the saga, Diamond's mother, Mama Dangote has been mentioned and blamed for being the cause of Mobeto's child being abandoned due to their personal quarrel.

Some people have continued to defend the child as innocent, so continuing to do so is hurting God's angel who knows nothing.

They say that it should come to a point where Mama Dangote should give up bifu and Hamisa should bring the child together with the other children of Diamond, otherwise the sin will gnaw at him.

Those people who are questioning what mistake did his grandson do to him that is unforgivable?

They want Diamond to stand up for his children because when they were looking for them it was him and the woman in question.