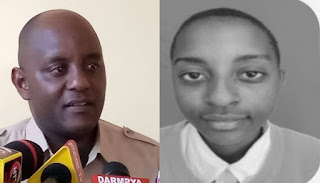 Cellie Mwambe in the picture with her Dad

CELLIE Mwambe (14), who is the son of the Member of Parliament for Ndanda state, Cecil Mwambe, died yesterday August 23, 2022, after throwing herself into the swimming pool at her home in Ada Estate Kinondoni Dar es Salaam, while playing with her colleagues and knock yourself down.

Speaking today, August 24, 2022, about the incident, the member of parliament has said that, after throwing himself, his son went to the shallow side and hit the ground and that he was too late to be taken out of the water to be taken to the hospital.

"There were no adults around, so he drank water until they came to save him, it was 'late'. When they took him to the hospital, they failed to save him, he died in the hospital after he had drunk a lot of water, I think even when he hit himself, he suffered a serious injury," said MP Mwambe.

The body of the late Cellie is expected to be buried tomorrow, Friday, August 26, 2022, in Ndanda province in Mtwara region.