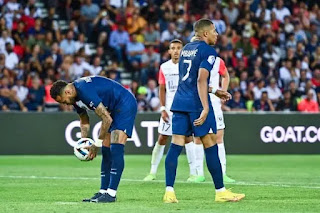 Reports claim that Mbappe and Neymar Jr do not get along

The coach of the Paris Saint-Germain football club Christopher Galtier has sat down Kylian Mbappe and Neymar after what happened during their game in the French Premier League against the Montpellier club to remove the differences that emerged between them.

In the 42nd minute of the game, PSG got their second penalty of the game which resulted in a goal, the penalty being scored by Neymar despite Mbappe asking him to let him take the penalty.

Mbappe, who missed PSG's first penalty in the 22nd minute of the game, was not happy with Neymar's act of denying him the second penalty to correct his mistake of missing the first penalty and leading the two to fight in the dressing room.

Coach Christophe Galtier did not want to turn a blind eye to the matter, so he called the two and reached a penalty shootout solution at the club. They agreed that in every match the first penalty found will be scored by Mbappe and if there is another penalty in the game Neymar will be responsible for the penalty. This was done to prevent the small conflict from growing into a big problem between the two.

Yesterday, August 21, 2022, PSG beat the Lille club 7-1 while the two did not seem to show any differences between them.