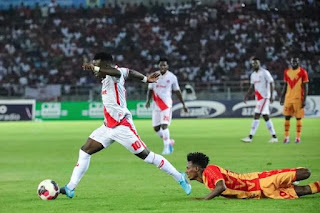 TOWARDS the first stage of the African Champions League, Nyasa Big Bullets Head Coach, Kalisto Pasuwa, has revealed that he has been closely following the Simba players through videos of various matches, including the Zambian, Clatous Chama and Pape Sakho, a Senegalese citizen before the game they.

Simba expects to play the first stage in the African Champions League against Nyasa Big Bullets of Malawi on September 9, this year in Malawi before the return game on September 16, this year at the Mkapa, Dar.

Speaking to Championi on Friday, Pasuwa said that he has been following some Simba players who seem to be a threat before the game with the aim of preparing to fight them.

"I think the basic thing for us is to give them their respect because they have a lot of experience with this championship but not to be afraid because even on our side our goals are to make sure we reach the top stages in this championship.

"Simba plays the good and the big ones who should be watched at any time because they have the ability to punish you at any time, that's why we try to follow them in some videos of their matches before we meet them because I believe it will help us achieve our goals," said Pasuwa.