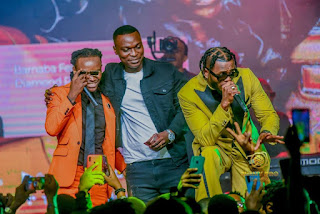 On Tuesday August 16, the album launch of one of the veteran artists in the pop music industry, Barnaba Classic, was held at the Mlimani City hall.

One of the events that was talked about a lot by music fans in the media and social networks was the video that showed Kinasa Msukuma taking care of a lot of money Diamond Platnumz and Barnaba while performing on stage where he was brought down by Diamond's bouncer a few moments after he started doing that.

In the katambuga program broadcast by Global TV and 255Global Radio Kinasamsukuma has opened up a lot about the incident that raised the emotions of many fans.

Kinasa expresses his dismay at the act of being taken off the stage when he was taking care of the money because he went up there after being mentioned several times by Barnaba who explains that he is his brother and mentioned his name so that he could go and give support and that is why Barnaba went to shout at Diamond's bouncer after he was taken off the stage.

However, he continues to say that the matter has been resolved as members of the WCB family, where yesterday he received a call from a family member and Diamond's mother's husband, Anko Shamte, thanking him for the support he is showing to them and asking him to end all that happened in Mlimani City during the launch because they are family members and have no need variable.

Kinasumku mushuka has congratulated Barnabas for releasing a good album

In addition, the young rich man has expressed his desire to help widowed mothers and those who live in difficult circumstances because he sees it as a forgotten group in society and in need of help and he has planned to do everything as soon as he finishes opening his company which is in the final stages of completion.