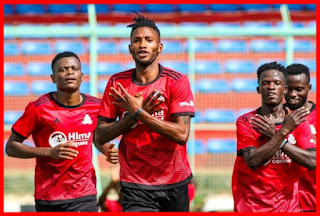 The attacker of Vipers SC in Uganda, Cesar Manzoki, a citizen of DR Congo.

The Head Coach of Yanga, a Tunisian, Nasreddine Nabi, has said that he has never needed the striker of Vipers SC in Uganda, Cesar Manzoki, a citizen of DR Congo.

Manzoki was recently linked to being wanted by Yanga, despite rumors of the star signing an initial contract with Simba.

The Congolese is persuading his club's management to allow him to join Simba this season.

Speaking to Championi on Monday, Nabi said that he never needed the striker in his registration plans for this season.

Nabi said that all the players he needed by sending recommendations to the team's Competition Committee, have been registered and are in the camp.

He added that he accepts the striker's level that he has shown with his Vipers team in the last season but it is not his need.

"The truth is that I have never needed Manzoki and he was not in the list of players that I have recommended in my registration for this season.

"Not being in my plans, that does not mean that he is a bad player, he is good, I respect his level.

"Because in my team, there are Manzoki-type attackers such as Mayele (Fiston) and Makambo (Heritier), so I see no reason to sign him," said Nabi.