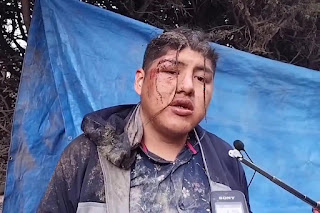 A MAN known as Victor Hugo Mica Alvarez (30), a resident of Bolivia in South America, has come forward and explained how he ended up being buried alive in a coffin after drinking too much.

The man was shocked to find himself in a coffin in a hole six feet underground after he passed out in the Bolivian city of El Alto.

Allegedly, Alvarez drank a lot of alcohol the night before at the opening of the Pachamama festival (Mother Earth festival), where people give thanks to the gods.

"Last night was the period before the concert, we went to dance and afterwards, I don't remember. The only thing I remember is that I thought I was in my bed, I wanted to get up to urinate and I couldn't move," he said.

He explained, "When I pushed the coffin, I was able to break the glass that was there and that way I was able to get out. They wanted to use me as a sacrifice."

He continued to explain how he managed to get out of the hole against the accumulated mud "I broke the glass, my whole arm was hurt, I got out with difficulty, but I went to the police and they told me I was drunk.

Alvarez reported the incident at the police station, but they refused to believe him and told him that he was very drunk, so it was just the brains of alcohol.