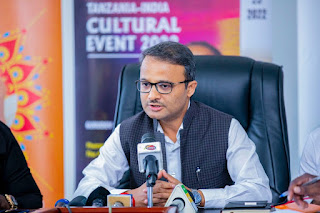 A famous PREACHER from India, Gurdev Sri Sri Ravishankar, who is also the Ambassador of Peace in the world will arrive in Tanzania on August 25, 2022 and on the same day attend the Indian and Tanzanian Culture event in the evening at the Julius Nyerere International Conference Hall and then address the world coming from Tanzania.

Mr. Gurdev, whose Art of Living institution has branches in 156 countries around the world, is famous for his sermons on peace, promoting culture and exercise for health, and his lectures are watched by more than 500 million people in the world. For this tour of Africa he will visit only four countries including Tanzania.

"He is coming to Tanzania to join hands with the Royal Tour and he will visit various places, he will conduct a cultural event, he will watch the Royal Tour film with his message and he will hold meetings with Tanzanian and Indian businessmen because his Art of Living institution also helps the country to find investors in various sectors," said Secretary General Ministry of Culture, Dr. Hassan Abbasi, accompanied by the Ambassador of India here in the country in a press conference in Dar es Salaam today August 23, 2022.