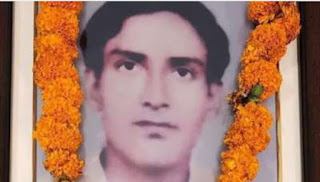 The body of an Indian soldier who went missing 38 years ago has been found in the glaciers after an army unit patrolled since last week in the Siachen area used by soldiers to hide, protect themselves from bullets or bombs.

The soldier has been identified as Chandrashekhar Harbola and explained that another 15 bodies were found while five soldiers are missing.

A squad of 20 soldiers was trapped in an avalanche in what is known as a battlefield in the mountains, on the border between India and Pakistan.

When the team approached the scene, they found the body where they found the identification number of the army and the Harbola force, drawn on a piece of metal.

In addition, the force conveyed the information to the headquarters and after a thorough inspection of their records, they found that the body belonged to a missing soldier named Chandrashekhar Harbola.

A large crowd of relatives, neighbors and citizens had gathered to pay him his respects, an event that was accompanied by

Tears came from everyone present at the scene and most of them could not believe that his body had been found and taken home with military honors.