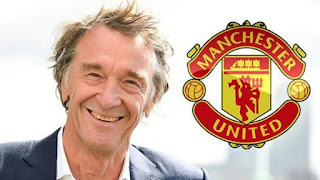 The British billionaire, who is worth $7.18 billion, according to Bloomberg, failed in his last-minute bid of €4.25 billion to buy Chelsea in May this year, while American businessman Todd Boehly succeeded in acquiring the club, and Ratcliffe has now directed his thoughts on the Red Devils.

His interest comes after Bloomberg reports that the Glazer family, who have owned United since 2005, are considering selling a minority stake in the club.

Preliminary discussions have taken place about bringing in a new investor, according to a statement from Broadcasting Corporation Sky Sports, which lists billionaire Ratcliffe as Britain's sixth richest man.

A spokesperson for Ineos said the company would prefer to buy a small stake with the intention of buying the club outright.