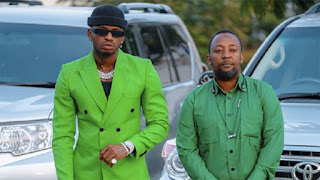 ONE of the managers of WCB Label, Hamisi Taletale, 'Butale' has made it clear that the artist Rayvanny is still under #WCBWASAFI because he has not yet completed the process of withdrawing from the label.

Babu Tale made the statement through Wasafi TV's #BigSundayLive program several months after the artist announced that he had officially withdrawn from WCB.

"Rayvanny has grown up, he came to Wasafi when he was not able to do business with Wasafi and now he has houses and is self-supporting and has opened his own record label, today #Rayvanny wants to go and continue his own business.

"The business is open and the permission to buy its rights/shares from us is what we are waiting for, it is in the process but we have given him the freedom to do his own work.

"As you can see, we have allowed him to do the show himself, everything by himself, so we are waiting for everything to be completed, he is going to be independent, so there are things that are in the order.

"When Vanny goes to Wasafi, he has not gone to be helped, he has gone to do business and his business has been going to help them in #Macvoice (he has not finished with Wasafi yet) it's just a procedure, you should know to end each other not like a paap lamp because everything is still under Wasafi until today," said Babutale.