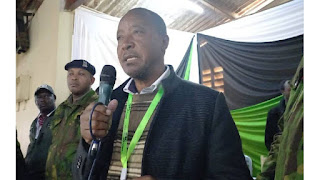 An official of the Electoral Commission in Kenya (IEBC) in Kirinyaga County in Kenya, Geoffrey Gitobu has died in a confusing environment, a few days after the general election.

Laikipia Police Commander, John Tarus told The Nation newspaper that the death was reported by the brother of the deceased on Monday afternoon.

The commander has explained that the brother of the deceased reported that his brother was driving a car in Nanyuki Town where he suddenly started feeling bad including severe dizziness, he was rushed to the hospital but his condition continued to worsen until he died.

The police commander has explained that when the brother of the deceased was interviewed, he said that his brother did not have any health problems and that he died at the Cottage Hospital where he was taken after suddenly being overwhelmed.

It is said that the election commission officer was a famous businessman in Nanyuki Town where he owns several commercial buildings.

Information about Gitobu's death has been confirmed by the Kirinyaga Election Manager, Jane Gitonga, who has said that an autopsy will be conducted to determine the cause of his death.