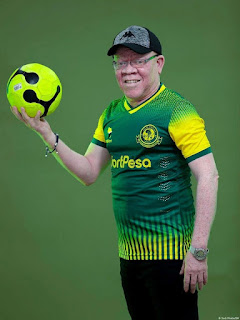 The ethics committee of the TFF found the Yanga club spokesperson guilty for using inappropriate words to the President of the TFF, Wallace Karia in the Azam cup final match played in Arusha.

The spokesman for the Yanga team was found guilty of threatening and humiliating Karia on Saturday July 2, 2022 at Sheikh Amri Abeid Stadium, Arusha during the final match played between Yanga against Coastal Union.

The secretary of the ethics committee of the federation, Walter Lungu said in the session they sat on July 11, 2022, they reviewed the complaints brought by the TFF Secretariat about Haji Manara regarding behavior and morals section 73 paragraph (5) of the year 2021.

Reading the sentence, Lungu said that in the game, Manara made inappropriate words in front of President Karia while quoting some of Manara's remarks

"You are following me a lot, this is the third time, I am not afraid of anything, anything and you cannot do anything to me. I have the power to do anything to you and you have nothing to do to me."

After those words, the Committee was satisfied to find Haji Manara guilty and ban him for two years not to be involved in football in the country and abroad and fined him Sh2 million, the punishment which officially starts from today, July 21, 2022, although he can appeal.

Some football fans in Tanzania are talking about the sentence

Some soccer fans who have been following the soccer game due to Manara being mentioned as an attraction in the game, especially when he is playing in front of his opponents, have had mixed opinions about the TFF verdict.

Some stakeholders say that in the punishments that have ever been given in the game of football in Tanzania, the punishment given to Manara is very small compared to the offense he was found by the TFF.

They say there are those who were completely banned from participating in the game of football and it will be remembered that the previous TFF president once banned him for misconduct in the game and later when the current president took over, he punished him.

"It is a mistake that he has had for a long time, he has no simile, he has been attacking people in public, he has been inciting hatred between two sides", said a long-time sports journalist from Tanzania, Ahmed Kivuyo.

He added that due to Manara's admission of wrongdoing, he deserved such a punishment so that it would be a lesson among other football stakeholders who have been pushing the limits.

However, the punishment of TFF has caused a wide debate on social networks as well as in the stones that have always been exchanged between traditional hometown teams.

On social media, some football fans who closely followed the traditional hometown matches between Simba and Yanga, both of which Manara has worked on, have had mixed opinions mixed with the love of their teams.

Naomi Zacharia wrote on Instagram expressing her disappointment with the TFF as for Manara it is like a springboard for her to become a football fan.

"We appeal, we don't recognize the punishment" the message that within a few minutes got more than a thousand likes and many comments while others mocked the fan's opinion.

Some of the lions fans that Manara used to be the spokesperson and shook the team in a period when it needed him the most as it was facing several important matches.

"He forgot himself a lot when he saw that if he had mastered brain soccer well, he would have been beaten for 20 years," wrote a twitter user who called himself wakolinto88.

The punishment that TFF has announced on Thursday, July 21, has been seen as part of bringing the spokesman of the Yanga team back into line, due to some saying that he overstepped the boundaries of his work.

Analysts say that the punishment is divided into three ways. First, it is seen as a warning to all football stakeholders, despite the fact that Manara is seen as a good promoter of football, but he did not deserve to cross the boundaries, rules and rules of the game.

Second, it has been mentioned that the punishment given is small compared to the crime he committed. It will be remembered that in the Football Association FA final game where the president of TFF Karia was the head of protocol for the invited guests including various government leaders.

Third, the punishment is like a suspension because it probably should have been 5, 7, 10 years or even life compared to the magnitude of the mistake he made in that game.

Jemedari Saidi, a retired football player and football analyst in Tanzania, has told DW that the punishment comes from publicly offending the president of the TFF

"I see the punishment as aimed at warning him, teaching him not to repeat it again, two years and a fine of 8000 dollars for breaking the TFF president's person is the same."