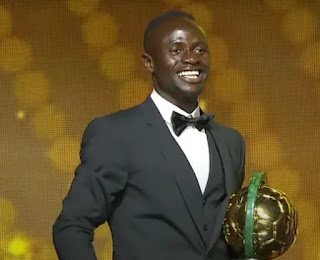 Sadio Mane after receiving his Player of the Year Award

Attacking midfielder of the Bayern Munich club and the Senegalese national team, Sadio Mane, has won the award for the best player of the year in the CAF awards given on the night of July 21, 2022.

Sadio Mane has become the 10th player to win the Best African Footballer award more than once.

The Senegalese captain was announced as the 2022 winner at the African Football Confederation awards ceremony in Rabat, Morocco on Thursday 21 July, 2022.

But Mane, who left Liverpool for Bayern in June, has twice beaten Salah at international level.

Mane's Senegal beat Salah's Egypt in the Africa Cup of Nations final in February and then again in the World Cup qualifiers in March.

The 30-year-old is the first goalkeeper to enter the top three in the African Footballer of the Year poll since 2014 when Vincent Enyeama came third.

George Weah and Abedi Pele are both three-time winners, while Samuel Eto'o and Yaya Toure won the award four times each.