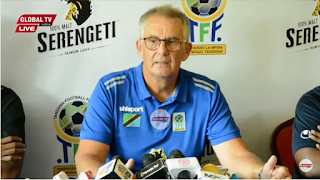 The COACH of the Tanzania National Team, Taifa Stars, Kim Poulsen, is disappointed by the action of the football authorities to deny the national team permission to train at the Benjamin Mkapa stadium.

Poulsen has noted that he feels bad and cannot understand the concept of depriving the national team of the benefit of practicing and preparing for matches on the real grass of the Mkapa Stadium and instead they are sent to the artificial grass while the game against Somalia will be played at the Benjamin Stadium with real grass. Cut off.

He emphasized that the act of Taifa Stars being denied an opportunity at least one day before the match while the U-20 competition is given priority over the National is a surprising thing.

"I am surprised and honestly I cannot understand, that when we are Taifa Stars we are playing the CHAN Finals qualification game, an important game and we are not allowed to practice at the National Stadium!"

In addition, Coach Poulsen has noted that all the players are in a good condition except the left back David Luhendeam who is suffering from muscle pain who has confirmed that he will not be involved in the game tomorrow.

Taifa Stars is expected to play two knockout games against Somalia where the winner will play against Uganda to get the winner who will qualify to participate in the CHAN finals.