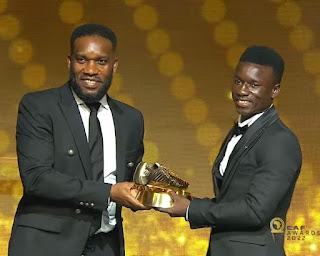 LINK The striker of the Simba club Pape Ousmane Sakho, shined at the awarding night of the Football Confederation in Africa CAF after winning the award for the best goal of the year.

The goal that has made Sakho win the award, is the one he scored against the Asec Mimosas team in the African Confederation Cup game.

"Thank you Tanzanians, thank you Simba fans, thank you all the players, I am very happy." said Sakho after being awarded the best goal of the year award.