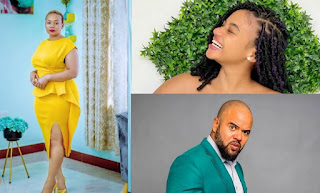 Paula is the child of P Funk Majani and Kajala Masanja

Bongo veteran PRODUCER, P Funk 'Majani' has said that his son Paula has a big chance to change his behavior as he has now started to realize himself and become an adult.

Majani has said this recently while being interviewed by the media while saying that he is currently talking well with his son while urging him to continue doing the things he likes so that he can be successful in his life at the same time wishing him a happy birthday.

"What I wish for Paula is to be independent (self-reliant) in her thinking and start looking for her life according to the system she wants. He should follow his heart and do something he likes and have passion. If you do a job you like you will be successful but don't do jobs that are the least, you are invading the fields, you will be lost.

"He told me he is launching his clothing store, I wish him all the best and I am there for him, to advise him. These days we talk very well, we get on well and he has started to become an adult now.

Paula, the child of Kajala and Majani

"I am not a big fan of internet issues for my children, even at first I didn't like it but it was difficult to stop because he lives with his mother. That has already passed and he already knows how to control the networks, the networks hit him hard and now he knows how to use the internet to build his brand.

"But there are a few idiots who will insult you and write this to smear you, once you get used to them, it won't bother you. I think they are just idiots, if you sit and see someone writing nonsense, you say that this person is just an idiot. If you argue with them, you lower yourself and you become a fool," said Majani.