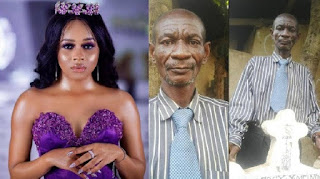 IF it is a few days after the stars of Bongo Fleva, Faustina Charles Mfinanga popularly known as Nandy and William Nicolaus Lyimo 'Billnass' got married, then an old man has emerged and claimed that he is Nandy's biological father.

Speaking in an interview with one of the country's media, the old man who identified himself as Charles Godfrey Mfinanga said;

"My name is Charles Godfrey Mfinanga, we lost his mother when she was pregnant. I was a miner, I could not find him and at that time in 1992 there was no telephone for communication.

"I have seen myself introduce myself to accept or reject me but let him know that I am his biological father if he has another one to raise him.

"Nandy's mother and I did not have any problem except that his sister was jealous of him when I was with that mother. He escaped/lost him as an employee and took him to a place I don't know.

"What I want to say to Nandy is one thing, I have never seen him, if he has realized that there is Charles Mfinanga more than me, let him be free and give him all the blessings but let him know that he is my blood.

"I am known all over Arusha, I met this woman who even now when I see her is old, I don't know what her condition is like if she recognizes me, if she recognizes me or if she rejects me, she should understand that Nandy is my child because she left pregnant," said Elder Charles Godfrey Mfinanga.

On the other hand, Nandy aka Mama Kijacho has not answered anything until now about the old man's claim.