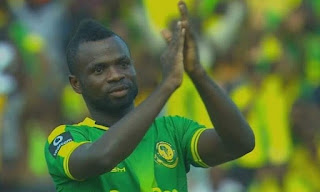 Morrison Hits Mkwara Mzito Kapombe, He Wishes The League Starts To End Each Other

LINK The striker of Yanga, a citizen of Ghana, Bernard Morrison, has promised to show the defenders he will meet next season, including Simba's right back, Shomari Kapombe.

Morrison joined Yanga for the first time, on January 15, 2020 before his contract brought a crisis and later on August 8, 2020 he joined Simba where he has moved again and returned to Jangwani after his contract ended.

Speaking to Championi on Wednesday, Morrison said that, following the intensity of the training he is currently doing for them in Ghana, he is sure that any defender who will be arranged with him once he returns to Bongo will trouble him badly unlike what he was used to before.

He added that he is working hard to make sure that next season he becomes more than he was in previous seasons because he believes in intense training and not other things.

"I am training in Ghana, which is very scary, so much so that if the coach comes to give me a chance to play in the next matches, then the defenders I will fight with should prepare to spit blood.