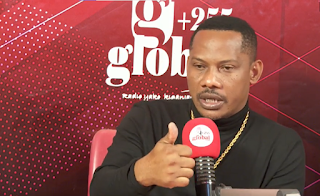 The country's famous entertainer and movie star Dr. Cheni has said that the deal to celebrate the wedding of Bongo stars Fleva Billnass and Nandy was given to him after a voting process where he emerged as the number one winner.

Cheni said this when he gave an interview in the Global TV and Global Radio Studios where he claimed that he was number one and his closest rival was MC Gara B who had to be given a deal for Nandy's Send Off to ensure that the party would be big and good.

The wedding ceremony of Billnass and Nandy was celebrated by Dr. Cheni

"On Nandy's side and on Nenga's side, they were cooperating that Send Off should do the wedding, so when they did the Send Off process, they saw that they should give the family to me to do the wedding, that is their decision, so they called me and asked me, of course, their calls were many when you get call from Nandy as soon as you get from Nenga." Dr. Cheni said.

There has often been great competition from fans and various people competing with two entertainers Dr. Cheni and MC Gara B to find out who is the Biggest MC in the country.