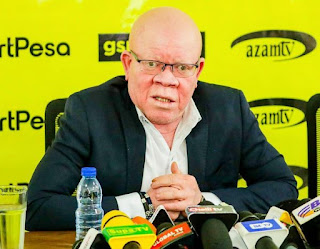 BREAKING: Haji Manara Is Banned For 2 Years From Playing Football, He Is Fined 20 Million

BREAKING: The Ethics Committee of TFF has sentenced Brother Haji Manara not to be involved in football matters in the country and abroad for a period of two (2) years and to be fined Tsh. 20 million [Tsh 20,000,000] for defamation of TFF President Wallace Karia The punishment begins today, Thursday, July 21, 2022.
Haji Manara disputed the statement of the President of the Tanzania Football Federation (TFF) Wallace Karia in the VVIP area during the ASFC Cup final game between Yanga and Coastal Union.
The Ethics Committee of TFF has mentioned the mistakes made by Yanga Club Spokesman, Haji Manara, including using foul language to TFF President, Wallace Karia during the match between Yanga and Coastal Union played in Arusha.
Next Post Previous Post
SPORTS